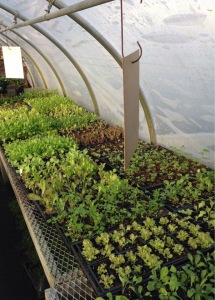 The Farm to Table Initiative (FTTI)  is a program that allows for fresh, organic food to be grown and given to local restaurants. This program has happened in a few places in Mass. but has been for the most part unacknowledged by businesses, schools and the community.

However, Attleboro High School (AHS) has begun its own FTTI, which has been providing greens to their Culinary program. AHS teacher, and head of the Greenhouses as a whole, Mrs. Sandy Copel-Parsons has personally spearheaded the project.

“There are politics involved with food, about who has it, who gets it, and it’s sad that we’re like that in the year 2014, but that’s just the way it goes,” said Copel-Parsons, who hopes programs like these can help fix that.

At the moment the greenhouses only grows lettuce and herbs, and according to Copel-Parsons this is because “The greenhouses don’t have a lot of daylight during the winter; that’s the problem with farming in New England.”

Copel-Parsons and AHS botany teacher Mr. Greg Finale plan to grow cucumbers and tomatoes in the spring, when the sun is out longer and the greenhouse is more easily heated.

“I’ve been doing this for so long that I’ve been taking best practices from different farming models that I’ve actually worked on, and sort of tweaking it to fit the high school’s needs,” said Copel-Parsons continuied, “It’s not about AHS necessarily, as much as how to get the community involved; how do you get chefs from Scorpios or different restaurants in town to buy in and make a commitment?”

The other people working on FTTI are AHS history teacher Mr. Ari Weinstein and AHS chef Kevin Deschenes. They each bring more awareness to the FTTI, and some support to the upkeep of the plants and greenhouses.

Despite these efforts, the greenhouse and greens for FTTI are mostly watered and cared for by Copel-Parsons, requiring her to drive to the greenhouse to water even on vacations.

Copel-Parsons recounted a time she had to sacrifice her time to keep the greenhouse afloat. “I remember getting in a load of plants on the eve of our Feb. vacation and leaving for Mexico the next day for a week. I couldn’t leave all the seedlings.

“I had ordered them and they came in late and so there they were. I was here [greenhouse] until 11 o’clock the night before I was leaving for vacation to make sure it got done, and then I had to make sure there were people lined up who would come in every day and water them, because they’re really dependant upon human care.”

Copel-Parsons hopes to soon create an automated watering system for the greenhouse so it can be left unattended on weekends and vacation days.